Diaphragmatic breathing is the key to your autonomic nervous system

Guess which one happens more? 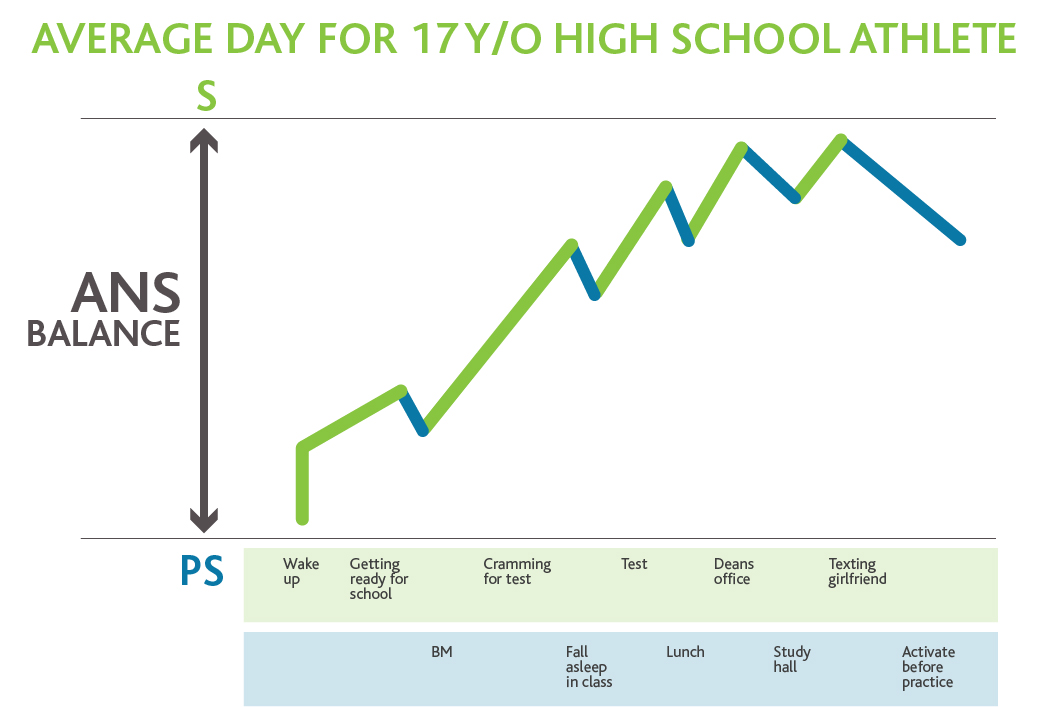 For most of us, on most days, the ANS is stimulated a lot more in the “S” direction than in the “P” direction. Life is stressful! And spending all that time in “fight or flight” mode leaves your nervous system out of balance.

Like wings on an airplane, the sympathetic and parasympathetic wings of the ANS should be contributing about equally to keep you in a healthy place. But most of us are flying more like the picture below.

Favoring your SNS doesn’t just wreck your ability to focus and perform. Over time, it can lead to conditions like high blood pressure, Irritable Bowel Syndrome, chronic pain, and mood disorders.

Fortunately, there are ways to activate the PNS and bring us back into balance. Yawning, meditation, and positive emotion and mindfulness exercises are a few. But my favorite is even simpler and more basic than that. 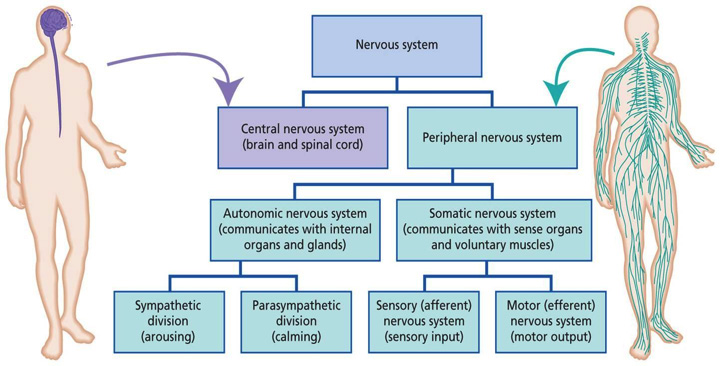 As you can see below, the ANS is the automatic connection between our internal organs and glands, and our central nervous system. It’s the link between your brain and a lot of what’s going on inside you. Your ANS is maintaining the balance in vital functions such as breathing, heartbeat, glandular secretions, salivation, and perspiration. 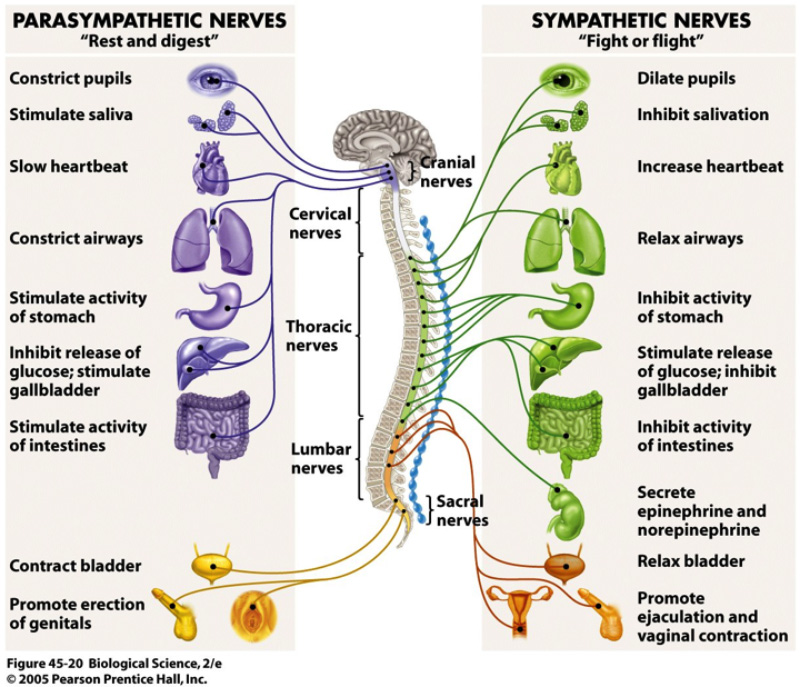 Understanding the structure of the ANS helps us understand how it works. Your ANS can be split into two divisions: the sympathetic division and the parasympathetic division. The first gets you riled up; the second gets you calmed back down. But you need them both to work in tandem.

The sympathetic nervous system, on the right side of the chart, connects to nerves all up and down the spinal cord. That extensive branching of nerves allows your ANS to mobilize multiple organs quickly and simultaneously. But the parasympathetic nervous system, on the left, connects just to the top and bottom of the spinal cord with very little branching. It creates a slower and more direct regulation in the organs.

Breathing is the key

When you breathe, your ANS responds. If you take quick and shallow breaths you activate your sympathetic nerves, telling your body that it’s time for quick reactions. If you take slow and deep breaths, pulling oxygen all the way down into your core, you activate your parasympathetic nerves. You tell your body that it’s time to calm down, get centered and start paying attention. Intentional and deep breathing,

And that’s just what happens when you breathe the Be Activated way. Your focused breathing actually activates the parasympathetic division. You bring your nervous system back to equilibrium.

A lot of coaches don’t see the value of parasympathetic activation right away. After all, we’ve been conditioned to think that athletic performance is about getting “psyched up”, wired on adrenalin and as highly stimulated as we can be.

Parts of it certainly are. But most athletes – in fact, most human beings – don’t need more sympathetic activation. We spend our days living the graph at the beginning of this article. What we need is better ANS balance.

And the unbalanced athletes never see it coming…

Recent In The News

After investigating the SAT process, I scheduled an appointment with Dr. Tom. Looking back, I was skeptical for sure, but was willing to try anything for the sake of improvement. I distinctly remember the muscle-testing results before activation, and then seeing them after. Immediately after activation, I felt loose. There was no tightness, and I felt peaceful after “belly breathing.” The next day we had an invitational race, and I felt the best and was the most focused during that race. I ended up finishing 5th, right behind some of the nation’s best runners, 7 seconds off my personal best. I became a believer as the results were seen immediately for me!

Before activation, I found myself injury prone as well as very inconsistent during my practices for track/cross country. I suffered from inconsistent practices and pained muscles and joints, but after one session of activation with Dr.Tom, I felt brand new, refreshed and explosive. I went from not qualifying for top seven my first cross country season to being the #1 runner the following year for both seasons, being an individual state qualifier and school record holder for the 1600-3200. Activation has truly changed the way I run and compete and it’s a great tool for any athlete. I activate every day before anything I do, whether it’s mental or physical.

In November of 2014 I was diagnosed with mononucleosis and the parvo virus. The severe pain caused me to miss the whole 3rd quarter of school and my whole wrestling season. My days consisted of therapy, specialists and hospital testing. I was referred to a pain doctor, as at this point I had zero quality of life. He referred me to Dr. Thomas Nelson for a new type of manipulative therapy. At my first visit with Dr. Nelson, he explained what he does and he started treatment. When he was done I jumped off the table and I was able to run without pain for the first time in 3 months. The work Dr. Thomas Nelson is doing is amazing and a breakthrough that should be known to all. I’ll be forever grateful to him. I have my life back!

In my last football season I suffered a Grade 1 sprain in my left knee. I was unable to play with it until I went to Doctor Nelson. After my activation I felt like a new person; I was able to play the next week and I felt just as good as new. The Activation Process and Doctor Nelson have impacted my life tremendously. I Self-activate to stay balanced, strong, focused and to avoid injury. Plus, it puts me one step ahead of the competition. Buffalo Grove HS, Class of 2017, Football and Baseball

My wife and I noticed Daniel moving better during games after being activated in your office. His drives to the basket were much stronger and smoother than we had seen before in his whole career.

Going in for an activation with Dr. Nelson the day before the ACT was one of the best decisions I could have made. The increase in my breathing and visual awareness helped me to stay focused and relaxed during the four hour long testing period. I went up 4 points from my previous scores. I can’t thank Dr. Nelson enough for his help in building my future.

I was a former collegiate and professional hockey player. During my career I suffered 3 concussions in 9 months. Despite resting and allowing ample time for normal recovery, I continued to have tightness in my neck, headaches, and eyesight issues. Shortness of breath was a common occurrence. My family and friends even noticed a difference in my behavior and a decrease in my level of sharpness. When I met with Doctor Nelson I experienced immediate results. He fixed a disconnect between my brain and muscles so that I could perform tasks that required using multiple signals.  Through his activation therapy, the tension in my neck and upper shoulder regions is gone and I no longer have headaches. My vision is more acute and my ability to focus is back to normal. I have become more positive, energetic, and upbeat.

Self Activation helped me recover from an ankle injury, drastically increasing its stability. It helped to clear my mind and improved my focus on the court. Following my activation sessions, I have found that my play quality has increased dramatically. I have experienced a much higher quality of life, both on and off the court, thanks to daily Self Activation.

I walked into Dr. Nelson’s office unsure of what to expect – and left completely amazed. The ankle pain I had been dealing with for nearly a year and a half had completely disappeared. I was in my first ballet class since my appointment with Dr. Nelson when suddenly, something in my mind just clicked. I was able to find those muscles my teachers were always talking about.